When we price to paint an outside, we usually decide how many days it will take while we are pricing. No matter how you are going to paint it you will have an idea of how long it has taken you in the past and how long other decorators take too. If we want to improve our business and make more money, we need to look at being more productive. We need to be able to paint the outside in fewer days.

To be more productive we need to be doing more work in less time. I am a big fan of spraying as you probably know and the main problem I come up against when talking to decorators is their current mindset.

What do I mean by that?

Let me try and explain. If you decide that “normally” the outside would take a week and I tell you to complete it in a day, then your mind immediately says “impossible” and you reject the idea. This is normal, my mind works the same, but you will never do things better if you do not believe that you can. Let us just for a minute use another example of how our mind works.

How much could you earn an hour as a decorator?

£15, maybe £20 or £30. This is what most decorators would say if they were asked about hourly rate. What if I told you that I know a painter that earned £430 per hour?

You may smile and nod but, in your head, you are thinking bullshit.

Another question for you. How much is it possible to earn an hour? Not just a painter, anyone. For example premiership footballers earn a lot. If you are on £200K a week then that is £5,000 an hour. Phew, that makes £430 seem like a low wage.

But in the world of business even this is small change. Some venture capitalists can earn £1 million an hour. Yes, that is million. Jeff Bezos (Amazon) earns $11.5 million an hour and that was before lockdown. Now suddenly the premiership footballers are roughing it.

Ok back to reality.

We actually are limited if we work for ourselves and trade our time for money with a customer. However, we can get more efficient with our time which will give us a greater return. If in the future, we want to lift the lid on our earnings then we can do that, this is something I discuss in my pricing book.

The point of all this is that sometimes our own mind can put limits on us.

For many years we all thought it was impossible to run a mile in less than 4 minutes. It was like a barrier that we as humans could not cross. A bit like the speed of light. A speed limit cast into the laws of physics.

Then in 1954 along came a fresh faced Roger Bannister. He was only 25 and he decided that the 4 minute barrier could be broken, and he was determined to do it. His mindset said that it could be done, and he worked towards achieving it.

Once Roger Bannister showed the world that it was possible many athletes have now done it, thousands of runners have run the mile quicker than 4 minutes.

Let us go back to thinking how long painting the outside will take.

Whatever you decide will usually be how long it takes. So, if you think, right I am going to do this in four days instead of five then you will plan the work to be done in four days. If you work with someone who did one in two days, then all of a sudden you would believe that it is possible, and you would also know how to do it.

I worked with a decorator who does a lot of outsides. I asked him to help me on a big render job. We were going to spray it and he wanted to see how I went about it. I told him that I only had a day available in my schedule and that is how long it was going to take.

He was sceptical to say the least.

Anyway, we finished the job just as the customer was coming home from work, we cleared up and loaded the van.

My mates parting words as we left the job were “If I had not seen it with my own eyes, I would never have believed it.”

This is an excerpt from my book “Fast and Flawless Systems” available on Amazon. 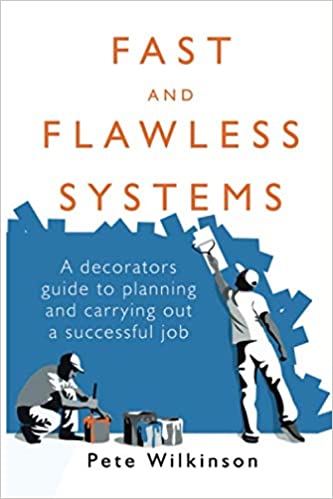 0 replies on “A Painters Mindset!”

We want to help YOU access Free Cash from the Government